The beginnings of my buggy project. This was what it looked like after I cleared all the junk off and put air in the tires
My late father, who was a child during the great depression, collected stuff - all kinds of stuff.  His collection included old cars and motorcycles, (some really cool and some pure junk); boats (mostly junk from 6 feet to 60 feet); antiques (some cool stuff and some weird, old junk); tons of car parts (about three quarters of it junk) and lots of just plain ugly, worthless, weird junk (like broken office furniture, crumbling windows and bundles of wire).  He was frequently seen crawling out of the top of a dumpster with a big grin on his face and something under his arm. This was more than a little disconcerting for his clients because, besides being an attorney and long-time judge in Florida, he was almost as well known locally as a junk collector (or it seemed that way to me). When he died, I was tasked with the enormous responsibility of cleaning out his warehouses by my sisters and brother. Maybe that was because I have always been so much like my father - although I'm a lot more organized, I'm not a hoarder and not fond of keeping anything I can't sell readily.

For some reason, this old dune buggy had been calling out to me for salvation from Dad's warehouse since I was 19 or 20.  Of course, sitting around over 40 years didn't help it much. This buggy blurred the line between cool and junk.  It had some potential but some big issues too.
During the dune buggy craze of the 1960's there were dozens of designs available, the most popular being the Myer's Manx. This particular buggy was called Super Shark and it was built in 1965 by Turchan Industries of Ontario, California. The fiberglass kit was designed to be installed on a late 1950s or early 1960's, shortened (82"), type-1, Volkswagen chassis. It offered an integrated fuel tank, rear jump seat and a flip-open hood that provided quick access to the battery, dash electrics and master cylinder.  It was fairly advanced for the genera and very unique looking.

When I first began thinking about taking on this project, I spent about an hour putting air in the tires, knocking off  cobwebs and making the engine run. When I say run, it was barely running.  It smoked, leaked gas, dripped oil and looked like hell.  The valve covers and engine sheet metal was rusting away. The carb was a varnished mess but salvageable. Rust was the key word on this buggy. The seat pans were almost nonexistent, the outer frame rails were gone and the shift tunnel was in bad shape too.  I'm fairly certain this buggy had seen many afternoon runs down the beach and through salt water before being parked and completely overcome by rust. It's fairly common knowledge that rust never sleeps.

Dad was a collector.  He wasn't real good at finishing projects. That's one way we differ. I get the most pleasure out of finishing a job. So I decided to take this on.  I pulled the body off the frame and the engine off the chassis.  I did a light rebuild of the engine and welded new frame rails to properly fit the body.  I also welded up a box-tube sub-frame in the front to protect occupants from injury in case of a collision.

I repaired and strengthened the old, cracked fiberglass body and at the same time rebuilt and coated the built-in fiberglass fuel tank. I had to fabricate hinges for the hood and installed cable locks to keep the hood from opening too far.  I also had some fun fabricating a nice-looking, brushed aluminum dash.   I fab'ed an entirely new wiring harness and made sure all the gauges, wipers, lights, turn signals and all other electrical items worked as they should.  I found some really, super strong seats out of a Mercedes-built, Smart Car and put them in along with seat belts. I tried to keep as many original parts as possible, like the funky exhaust, steering wheel and original Hurst Volkswagen shifter.  When all the repair work was done I turned my attention to painting the car. It's a Porsche color, Guard's red. I also bead blasted and painted the original slotted wheels and installed new tires.

When finished, it wasn't a show car, just a great looking, good-running driver.  It was a fun project, but it probably wasn't worth the effort ... except that I finished the project for Dad, and that was priceless. 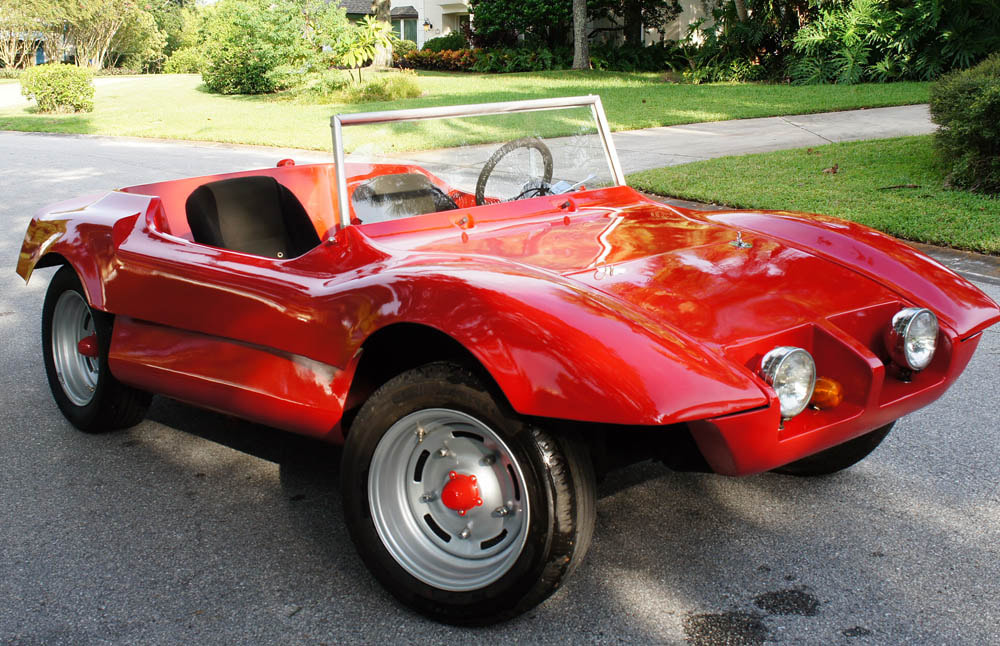