A lifetime of fixing other people's junk 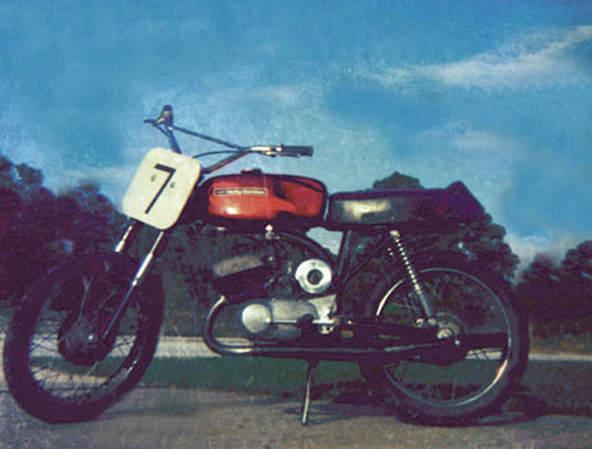 My Rapido in 1971 or 72. This was the flat-track version. The motocross version had knobbies.
This album has photos and thoughts about some of the motorcycles I’ve restored or renovated over the past several years.  Although I occasionally take on clients, most of my restorations/renovations are for me.  I do all the work - from digging around in other people's junk to the tear down, the mechanical rebuilding, the paint, polishing, electrical and mechanical.  There are a few specialized tasks I farm out, like chrome plating (I hate dealing with deadly poisons) and tasks for which I do not own the correct tools (i.e., dissembling old BMW crankshafts). There are also jobs I prefer to leave to experts (like speedometer repair). But on most of these bikes I have completed either all of the work or the vast majority of it.

My fascination with motorcycles began when I was about twelve. My dad helped me buy a 1968 Harley 125 Rapido (more on that story under the Rapido restoration). When I was a kid, Dad would often buy cheap, wrecked bikes from salvage yards, fix them up and sell them. With four kids, you can always use extra cash.  I always though it was a cool way to make a little extra money, but more than that, it was fun. I quickly became fascinated and then obsessed with motorcycles.

When I plopped down a hard-earned $75 on the counter of St. Pete Harley Davidson for my 1969 Rapido (pictured), I knew there would be work to be done before I could ride the bike. It had been wrecked and had been sitting outside in the storage yard for at least a year.  Right off the bat, dad said, if I wanted to ride, I had to learn how to repair my own bikes.  He gave me a hand getting the bike going and within a weekend I was cutting ruts in the yard in a tiny race course I built around the house . I rode it everyday I could. Within a few months I knew the bike inside and out. I replaced the piston and cylinder, rebuilt the carb, adjusted the timing,  painted the bike, straightened the forks and changed the tires and tubes more times than I could count. I learned from helping Dad, but most of the skills I now rely on came from reading stacks of motorcycle magazines and service manuals, and of course, trial and error. In an amazing twist of fate, some 40 years after I abandoned this bike for a new model,  I found most of the original parts buried under a pile of junk in my dad's warehouse shortly after he died.

Most of the bikes you see in this album I’ve owned, although a few were painted for friends. Every once in a while I’ll paint a bike or do some work in trade for another bike or even a few bikes. Even though I occasionally build bikes for others, I really consider this a hobby.  My ultimate goal with a restoration is to make my bikes beautiful and safe. I love beautiful,
original-looking motorcycles I can ride everyday.  I certainly appreciate pricey museum pieces, but I like riding bikes too - and with a museum quality or extremely rare bike, it just isn't worth the risk. That's why I don't engage in too many museum-quality restorations. I try to make my bikes as original as reasonably possible. Some folks with this hobby spend thousands for parts that are original, but not necessarily safe or dependable (like original-equipment tires, handle grips, spark plug wires, cables and batteries). This may win you first place in a 100-point competition, but after spending that kind of cash, most people would be hesitant to ride the bike - and like I said, that isn't for me.

A lot of people confuse restoration with renovation (a term more often reserved for fixing up an old house). To me, the difference between restoration and renovation is this: A restoration is a complete tear down of the bike. Repairing or replacing every nut and bolt– thousands of pieces. A renovation is simply making the bike look and run like new. I do both restorations and renovations, but ultimately, a renovation brings me more pleasure. There is a quicker turnaround and a lot less money is involved.