We receive a lot of inquires about the tools we use or questions about what gear is best for a particular type of riding. We've found that some tools or products make jobs a lot easier. In the same sense, having the right motorcycle gear at the right time makes riding much more pleasurable.  As an extension to the VBB technical advice we provide, we hope these reviews help make your motorcycling experience much more enjoyable. 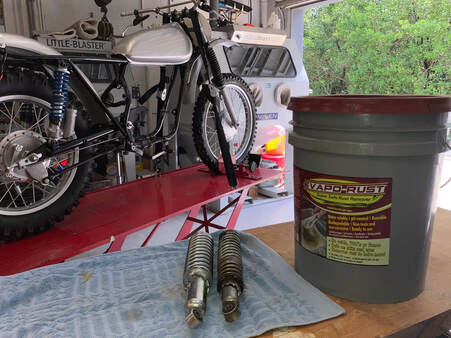 The shock on the left was removed from the bucket and the one on the right is going in. My wet and dry media blasters can be seen in the background. They also remove rust quickly, but the media can alter the texture of the metal. EVAPO-RUST does not.
You're going to thank me for this, because this nifty solution just may be one of the best time savers you've ever found.

You may have heard the phrase rust never sleeps.  Neil Young fans remember it as the title of his outstanding live album from 1979, but that saying started life decades earlier as the slogan for Rust-Oleum paint. I don't think any advertising catchphrase has ever rung truer for me. Rust is always sneaking up on my motorcycles. I see it pop up on my restored bikes in aggravating little spots. It frequently appears on chrome or cad-plated bolts - right though layers of polish and wax. I have to jump on these spots right away to keep them from spreading or doing more damage. Many of my new projects are motorcycles that have been left sitting in the elements, or in garages, for decades. They're often covered in surface rust. The fuel tanks are rusty inside and sheet metal is frequently rusting under the paint. Rust and corrosion removal often account for a substantial percentage of the time I spend on each project. But, I've recently found a way to greatly reduce the time I spend removing rust. I let EVAPO-RUST do it for me!

Rust is the by product of oxidized iron. Once corrosion begins on metals, rust appears and it keeps growing until you arrest it.  Over the years, I've used steel-wool on chrome to remove light spots of surface rust. Where rust is deeper, like on the frame, I'd sometimes grind it off or use a wire wheel. My wet and dry media blasters also remove rust quickly, but they're expensive and they take up a bunch of room. These blasters can also alter and sometimes damage the base metal. In the past, I've used muriatic acid (pool acid) or citric acid to clean rust from fuel tanks, but there are real environmental concerns with using acids. Additionally, they can be dangerous if not used with great care. These acids also eat at and thin metal surfaces. Each of these rust removal techniques can cause damage to the base metal. EVAPO-RUST does not damage metal and that's why I use it.

How Does EVAPO-RUST work?
Unless you're a metallurgist, a chemist or work in the medical community, you may not have heard of chelation. Chelation therapy is sometimes used in the medical community to remove heavy metals and minerals from the body. It's most often used as a treatment for some types of poisoning. But, it's also a dangerous treatment. A somewhat similar process is used by EVAPO-RUST and they call it selective chelation. This is a complex chemical process that I, honestly, don't fully understand, but I'll try to explain. When you place your rusty shock absorber into a bucket of EVAPO-RUST, synthetic molecules bond with metals and hold them in suspended solution. Apparently, there are different synthetic agents that bond to different types of metals, but the active ingredient used in this product bonds exclusively to iron. This product is strong enough to remove the iron oxide (rust) from the metal, but it's too weak to remove the iron from the steel. Once the rust is removed, a sulfur-bearing, organic molecule pulls the rust away from the chelator and makes it water soluble. This allows for more rust removal. Did you understand all that? But, discussing this reminds me way too much of my college chemistry class - a bad memory for me.

Whether you understand the process or not, the bottom line is EVAPO-RUST works. I've removed rust from a wide variety of parts including, fuel tanks, fork tubes, shocks, chains, exhausts and sprockets, as well as every kind of hardware imaginable. I've never dunked an entire frame because, well, it would be really expensive.  A five gallon bucket will set you back nearly $80, but, it's worth every penny in time savings.
Can this stuff be used more than once and does it have a shelf life?
From what I understand, there is no predetermined shelf life for EVAPO-RUST.  It can be used over and over until the iron content makes it ineffective. I've been using my most recently purchased, five-gallon bucket for nearly six months. It sees a fair amount of use. You'll be able to tell the solution is spent when it no longer removes rust.
For more information on EVAPO-RUST, please follow this link to their website:
evapo-rust.com/