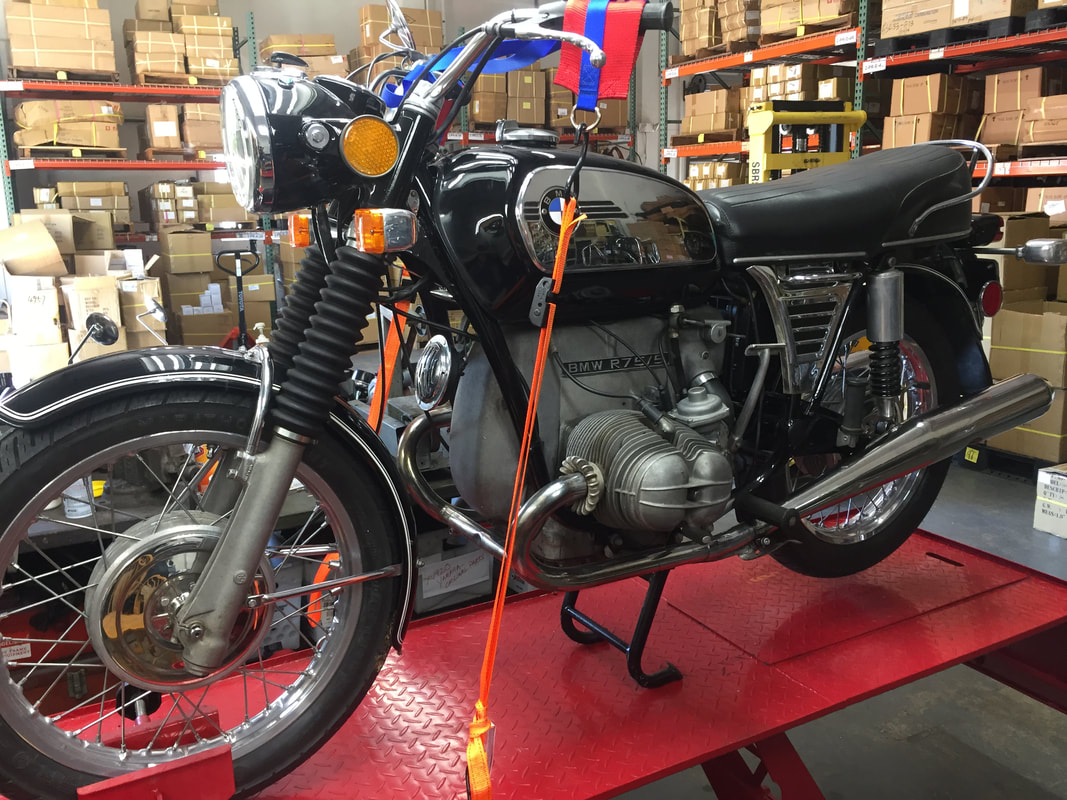 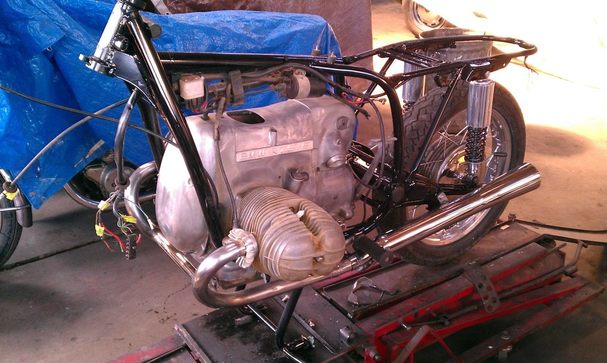 In the process of being completely stripped down
When large, low pressure systems take a short leave from the warm waters of the Caribbean and relocate into the Gulf of Mexico off Florida's west coast, huge tropical storms can form.  We see them nearly every year. The sheer volume of water pouring down from the skies and onto our normally moist state can have devastating, if not unexpected consequences. With so many Floridians living at, or just above, sea level, it's inevitable that hundreds, if not thousands of homes, garages and businesses will be flooded with several feet of water - easily enough to flow down the exhaust pipes of a parked motorcycle and into the cylinder head, where it begins to ruin the engine.  That was exactly what happened to this beautiful 1971 R75/5.

A few years back, a friend told me about a widow who was selling a pretty decent R75.  I gave her a call and went to look at the bike.  The paint and chrome were indeed pretty nice. The bike was almost all original, complete with tool kit and manual.  I asked her if it ran and she said she didn't know. The widow was smart and knew the value of the bike. She wanted $2500. At the time, I was really interested in an electric start R75 or R90S to keep, so spending a few bucks more than normal would be expected - especially for a really nice, original bike.

But, I'm getting ahead of myself. This woman's husband collected bikes. Some were nice, most okay and the rest was junk. My friend and trading partner bought most of the collection from her a month or so prior. He told me he removed several of the  bikes from a low-lying garage that had been partially flooded a few weeks prior during one of our no-name tropical storms. He was pretty sure this BMW hadn't been a waterbaby. It was supposed to have been in carport at their house during the storm. My buddy is terrific at finding really good deals on bikes, but he wasn't particularly interested in this BMW because the lady wanted too much for the bike.  Make no mistake about it - I'm all about good deals too, but I don't like bikes that take an inordinate amount of time or expense to restore (unless exceptionally rare, bucket list types). That's why I normally walk away from wet bikes and cars. During my misspent youth, I repaired a few bikes that had been recovered from unintended, wet-tire, waterfront drives. They were always super cheap and had more problems than any other restoration.

With that knowledge in my back pocket, I was suspiciously cautious inspecting the BMW. There was no rust on the chrome parts. No mucky waterline on the engine. The bike rolled, the brakes worked and didn't squeak. It honestly didn't look like a flooded bike. I checked the oil level - it was good, clean and not a trace of the white, tale-talk snot you so often see when water and oil slosh around together.  Good. Really good!

I pushed down the old, plastic Bosch key.  Nothing - no juice.  I flipped up the seat and noticed a lot of corrosion around the battery. Not a big deal -- that can happen to any bike sitting around too long.  I closed the seat and tried to gently push down the weird, sideways, kickstart lever with my hand.  It didn't budge. So, I put my foot on the lever and tried a little more force. It momentarily felt like the lever wasn't going to move, then it let loose and a stream of water shot out the stainless steel mufflers (the only non-original part).  Bad. Really bad!

I felt horrible handing news like this to a widow. But I didn't need to say anything.  She knew enough about engines to know that a blast of water out the exhaust was an ominous sign.  I explained that it was going to take a complete tear down of the  engine and probably the electrical system to get this bike back on the road.  I told her I wasn't really interested in doing this much work.  But the body work was so nice I knew at least there would be a demand for that stuff on eBay - just not $2500 worth or anything close. As we were talking, I asked about a title - there wasn't one.  The bike had been purchased a few years prior in Georgia which doesn't have titles for vintage bikes. She had a good bill of sale, but in Florida, it would take that bill of sale and $400 to get a title. I was openly honest with her and she trusted me. She asked what I thought the bike was realistically worth. I told her, from what I could tell, this bike was a good candidate for salvage. I said somewhere between $500-750 without a good title. She asked if I would buy it for $650 and I said sure. Driving away with the bike in the bed of my truck, I was pretty certain I had made another expensive mistake.  I don't like to sell bike parts and I knew that unless I traded it to someone, I would be stuck trying to make this bike right -- and doing that was, more than likely, going to be very expensive.
Back at the shop, I immediately drained the oil. I was shocked to find no water. A cursory inspection of the top end revealed that the water was confined to the cylinders, and they were so well oiled that there was no evidence of corrosion. All they needed was a light hone. The rear end and tranny had a bit of oil that had leaked in from the vents, so I flushed them thoroughly under pressure with a kerosene spray.  I did this until there was no trace of water and then pickled both with a kerosene/transmission fluid mix to protect the gears. I thought for sure I'd be replacing the bearings on both. 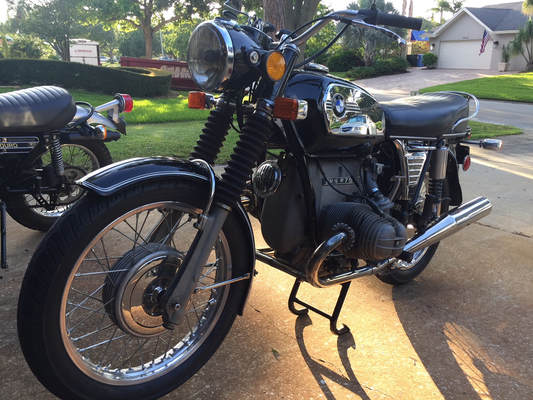 I let the engine and drive line parts sit a few weeks in the oil bath and worked on the carbs and electrical system. The carbs were a mess, but that was because the bike had been sitting a couple of years. When I reassembled everything, I was pleasantly surprised to hear the bike start right up.  There was no smoking, no noisy bearings, and shockingly, no sign of moisture or water damage. I cautiously road the bike around the block and was again surprised to find the bike shifted just like a BMW of this vintage is supposed to do.  A little clunky but solid. No odd noises. In fact the bike ran really nice. I did find some serious electrical problems but I don't think that had anything to do with water damage. There were several bad connections, dead relays and worn-out switches - and one giant short in the back of the headlight. I didn't know about the short on the headlight until it started smoking and flames were shooting out of the headlight shell. Luckily, I had a pair of big wire cutters on my bench next to the bike, so I quickly cut the lead and shot a small fire extinguisher into the shell. Even with that fire being limited to less than 30 seconds, the damage was significant.  I ended up replacing a lot of the wiring in the headlight shell. Those few seconds accounted for several hours of works and a couple hundred dollars in parts.

While I was waiting for the parts, I went ahead and stripped the bike down. I painted everything to factory specs including the frame. I do my own paint, but I do not have the talent for pinstriping. That is both an art and a delicate skill - and to lay down those stripes to original BMW specs, one has to have some very special talent. The guy who did my bike was about to retire.  He have been pinstriping parts for local BMW dealers since the 1960s. He did a wonderful job. I felt honored for this BMW to be his last pinstriping job.

I got the bike running again and put most of it back together in a few months, but then it sat on one of my bike lifts for a couple of years -- mostly because I didn't want to get into that /5 headlight again. A good bit of an R75's electrical system resides in the headlight shell. The speedometer has a tach built in, so it's large. And it sits right in the middle of everything. There is not much room to work and it's a real pain to make good connections. But once I got the urge to finish the bike up, it went much quicker than I had anticipated. I finished the bike in a weekend and was mad at myself for not completing it sooner. By the way, I've put at least a hundred miles on the bike so far. There are no engine, tranny or final drive noises. I've found no clutch issues and no issues with the charging system. Needless to say I remain shocked.
At this moment, I'm donating this bike as a test platform for a couple of different carb kits and exhaust systems (hence the picture in my employer's warehouse).  But in a few weeks, she'll become my "old man bike" again.  She'll be fired up regularly for short little weekend drives and the occasional vintage bike show.  Even though I've kept plenty of vintage BMWs, Triumphs and other assorted bikes around. It's nice to have one that starts immediately with just the touch of a button.

I find the R75/5 is the really the perfect vintage BMW for me.  With with its little chrome toaster tank and Art Deco look, the bike looks deceptively vintage, but at its heart it's really a fairly modern and dependable motorcycle. I have older BMWs which are more desirable to collectors, but they're certainly not as rideable. The R75/5's electric start is wonderful for a guy with beat up knees and the electrical system is just modern enough to be reliable. The bike is lightweight and agile, but still very comfortable for a 6-footer with gray hair. There's plenty of power for 'round-town crusing or running down the highway at 85mph. It's a delightful bike and I'm happy I revived this waterbaby and let her live again.

Note: I'll post more pictures as soon as she gets home and we start wearing the nubs off the tires.