I've been painting motorcycles almost as long as I've been working on them.  It took years, working side-by-side with experts and old-timers to learn what it takes to pull off a truly beautiful or authentic, factory-style paint job. Believe it or not, more than anything it requires tons of patience and dogged perseverance (sticktoitiveness).  I've found the personal technique comes from  the observation of other, experimentation and practice.

For most folks, perfection isn't necessary or even a reasonable expectation, but, with the right tools and a few tips from others, you will probably find you can put a really decent paint job on almost any motorcycle. You don't even need a compressor or expensive spray gun. I was once challenged by a buddy to paint a bike using off-the-shelf spray paint (aerosol, spray bombs, rattle cans) from an auto parts store. I used my normal prep and finish techniques and I was shocked how nice the final product looked.  I plan on doing it again for this website just to show it can be done.

I hope to soon be providing a step-by-step manual and several videos showing the following skills:

I'm just getting up and running on this section, but I have several painting projects over the next few weeks, so I hope to have the material to warp this up soon.  In the meantime, I invite you to take a look at some of the project's I've worked on over the past few years.  Once really interesting job was a repair or a 1971 Yamaha XS650.
Follow this link to see how this hard to find fuel tank was saved from the scrap heap!
1971 Yamaha XS 650 gas tank rebuild:
Baja Baby - 1972 SL350 project:
his is a long-term project I've been putting together.  I've always had a soft spot for the early enduros and scramblers of the 1960s and 1970s.  After I found out a Honda SL350 won the first Baja 1000, I decided to build my own little "Baja Baby" SL350.
After settling on a paint scheme, I designed my own Honda-style logo. I plan to finish this project in the next month or two, so keep an eye out for the updates. 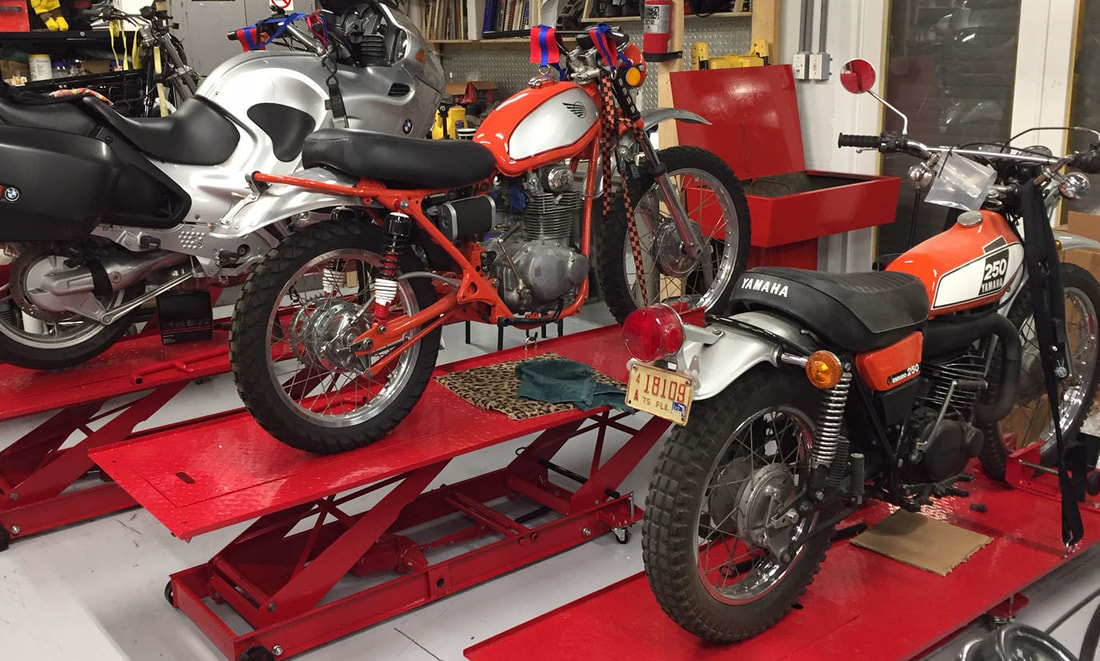 Unfortunately, I don't have any better photo of the bike in progress. This is the roller with the engine temporarily fitted to build an exhaust. The shocks are also temporary.

The Yamaha TT500 is one of my favorite bikes.  I bought one several years ago at a swap meet in Dayton during BikeWeek. This  bike has a particularly interesting story.

In February of 2010, I struck a deal with a guy who had a TT500 for sale on CraigsList. We spoke on the phone and he agreed to sell the bike for $1100. This was a Monday. He asked if I could come by Saturday to pick up the bike. It wasn't a problem, although he lived about 100 miles from my house. I told him I didn't want to lose the bike to another buyer and he kindly agreed to remove the post from Craigslist. The friendly gentleman seemed absolutely sincere. He was supposed to text me his address later in the week.  When I hadn't received a text from him by Friday, I called his cell phone. There was no answer on Friday.  I called again Saturday. And again, and again. Several more times over the next couple of weeks. I must have left 20 messages. Finally, I gave up, very disappointed..

About a two months later, I was walking thought the crowds at the big Daytona swap meet when I spotted an old Winnebago with a bunch of vintage enduros lined up for sale.  I immediately recognized the TT from Craigslist.  It had a huge dent on the left side of the tank under the logo and a big tear in the seat. There was no doubt it was the same bike I had tried to buy earlier.  I was certain I'd have to pay more since I was positive this guy had swooped in and bought the bike out from under me.  I asked the guy point blank if this bike was the one from Dade City for sale on Craigslist a couple months previous. He had a strange look on his face.  I already knew the answer, but it wasn't what I expected.

It turns out the guy selling the bike was repairing his barn the week I spoke with him. He was an experienced contractor and was installing massive new wood beams that ran the length of the barn.  Unfortunately the day before I texted him, a beam broke loose, fell on the guy and crushed him.  His wife asked the friend to sell the bike. What made this really unusual was that this friend had purchased bikes from my father in the past. It is a really, really, small and weird world!