During the past 45 years, when I wasn't working on motorcycles, I was either working as a pilot or running a media production company (film, video, photography, web/graphic design). My creative side is a lot more fun than the technical side of me, so I like to spend time nurturing that part of my mind.  I love to create images on film or video, manipulate those images in Photoshop, draw  and write. Now that I'm back where I started (in the motorcycle industry - which is my fifth or sixth career) I occasionally get to design some advertising for our website.  Some of the images are included below.

I'll also be posting work I've done for fun and work from others that I like. So, this part of the website will constantly be receiving new elements. I invite you to check back frequently! Also, please remember that I own copyrights to this artwork. If you'd like to share, please contact me and ask permission. 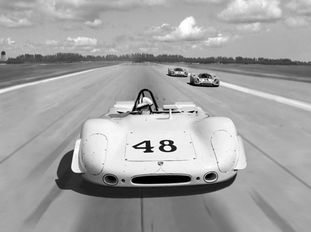 McQueen racing at Sebring in 1970.
This is a GIF animation I created to honor one of my favorite motorcycle-related celebrities, Steve McQueen. He was a celebrity who hated the spotlight, but loved motorcycles and motorsports in general.  That's one of the things that made him so cool. He had a rough life early on (some of it due to his own mistakes), but turned himself around and found his niche. He was known to help young kids in need and was a man of principal. Before he ever acted, he earned a decent income as a talented motorcycle racer. In movies like ﻿Bullitt ﻿and the Great Escape, McQueen built a reputation a talented actor who wasn't afraid to do his own stunt driving. Later on,  McQueen used his acting leverage to gain access to the automotive racing world. He was known as a fiercely competitive race car driver. When I was a teenager, he raced at Sebring in Florida not far from my home. He came within seconds of winning, placing second in a 908 Porsche against legend Mario Andretti and his well-funded team in a Ferrari.
McQueen loved all thing mechanical and was a pilot who owned several vintage aircraft.  He also amassed a wonderful collection of vintage cars and motorcycles. In the photo above right, he's blasting through the desert on CR 400 Husqvarna.  In the animation above, he is pictured on an early 1964 Triumph TR6C Desert Sled. Heavy and slow by today's standards, McQueen and riders like him wrestled these bikes through desert courses, enduros and dirt tracks around the county.  I created this GIF combing several photo images.
Above are some banners I designed for my employer MAP Cycle.  I enjoyed creating these composite images using Photoshop. Each image has dozens of layers and many subtle touches. I started drawing motorcycles and cars when I was second or third grade.  I've always been fascinated by automotive art.  The art coming out of Detroit during the 1940s and 50s inspired me, though I know I could never work at the level of those great artists.

Over the years, I've created a lot of graphic art - everything from billboards and book covers to logos. Of course, I had to create my own logo for Vintage Bike Builder website.  This logo was structured around a graphic representation of the front wheel of my father's 1915 Indian, my love of flying and my pilot's wings. What do airplanes have to do with motorcycles? Freedom and speed!  The type on the logo is similar to that used on some motorcycle brands of the early 1900s.