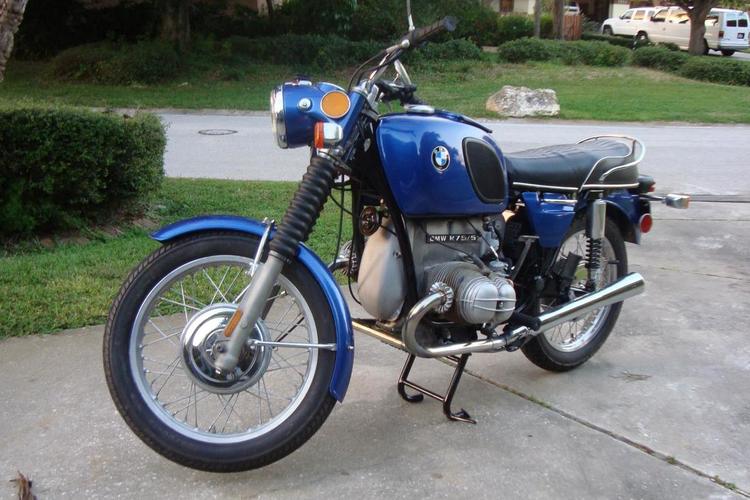 Not my image of a "restored" BMW, but it's what the client wanted

I usually like restoring bikes to factory new condition (or as close as reasonably possible), but this bike was a little different.  I received this bike as part of a package deal. I didn't really want it, but it was included, so I took it.  It had ridden hard over several years without a lot of maintenance.  It ran, but barley.  One cool feature was the large Hoske police tank - easily the best feature of the bike.

The primary objective of this bike was to put it together and sell it as quickly as possible.  Unfortunately, everywhere I turned I found a new problem - damaged lifters, leaking pushrod tubes, worn clutch, a pulverized throw-out bearing, rusted-out exhaust and a host of wiring issues. Since the bike wasn't original, I planned on fixing it up quickly and selling it. Within a few weeks, I had the frame painted, the rims polished and the engine with a fresh top end sitting in the frame.

About that time, I had some thoughts about painting it green and white and turning it into a European police bike, but before I could contemplate that idea too much, a friend of a friend walked into my garage. He had seen a BMW I recently restored and asked if I would build a customized BMW for him. I showed him the newly painted frame and rebuilt engine and he put a bunch of cash in my hand. It's hard to argue with that.

Just one little thing -he didn't want a black BMW.  In forty years of painting vintage BMWs, this was first time I was asked to paint a /2 or /5 model anything other than black. This guy wasn't a traditionalist, not by any means, but he loved the dependability and simplicity of a vintage BMW. I'm just happy I wasn't working on a mid-sixties R69S when he walked up. I would have had to decline the offer. He had a paint color in mind and he wanted megaphone mufflers installed. So, I canceled the order for the new Whispertone mufflers and mounted a pair of megaphone mufflers off a CX500 I had sitting around the shop. He also shunned the traditional BMW pin-stripping but insisted on matching bags and helmets.

We finalized the paint color and a few other minor details and within a week or so, I completed painting the bike an electric, Lincoln-Mercury blue (sans pinstriping). The customer also wanted to add a set of Mikuni carbs rather than the stock Bings. When it comes to restoring BMWs, you can go ahead and call me a traditionalist. BMW has always built an excellent product and in my opinion, you don't want to mess with success. But, I was building a custom bike, so I fulfilled the order.  I admit, I saw the carb swap as unnecessary heresy, but after witnessing how much better the bike ran on a set of VM34s, I became a full-fledged, Mikuni convert. The Bings are great too, but the Mikuni carbs are super dependable, fast starting and add a bit more top end.

Honestly, this bike wasn't really my cup of tea, but the customer really loved the finished project. I think a lot of us dream about tweaking our motorcycles here and there until it's exactly the bike we're dreaming of. That vision is rarely the same for any two people. This project gave me the opportunity to build a bike to a customer's exact specifications - and I was okay with that as look as the product looked good, ran well and was safe. It wouldn't be right for me, but it was just perfect for him. The customer was thrilled to see the job completed and to me, that made the project worthwhile.