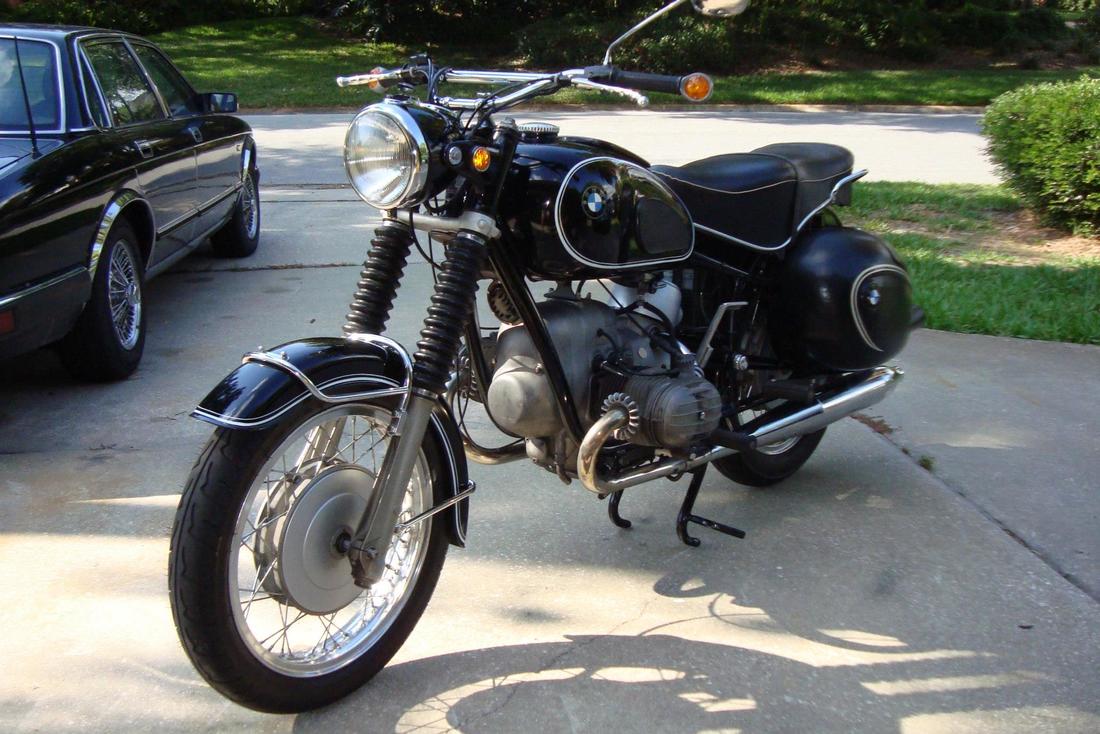 Ricky at the top of Mount Mitchell in North Carolina
In the summer of 1969, my father left for Europe to pick up this R60US at the BMW factory in Munich. He then spent several weeks touring Germany, Italy, France and the UK. He even made it over to the Isle of Mann for the International TT. The dollar was so strong then, the bike and the tour were about the same price as buying the bike in the US - at least that's the story dad always told. Maybe Mom knew otherwise.

On his way home from Germany, Dad rode the bike from the port in NYC to meet our family outside of Asheville. I was 11 at the time and I was so thrilled to see my father who'd been gone for a month.  I remember bolting from our family station wagon the moment I saw him pull into a narrow parking area overlooking a Kodachrome-colored valley in the Smokey Mountains. I ran up and threw my arms around him, almost knocking over the bike. I was so happy to see him, I didn't want to ever let go. But I was part of a large family, so while my siblings got their hugs in and Dad wiped away Mom's tears, I was gawking at the most beautiful mechanical device I'd ever seen. This bike, the perfect projection of my father's image, was handsome, bold, strong, powerful and, more than likely, dangerous.  When Dad had his fill of emotional and talkative kids, he mentioned we had to get back on the road. He threw a leg over the dusty, shaft-driven twin and called out to me, "Richie, hop on back." I was so excited, I couldn't say a word - I felt so special, so loved. I jumped on, cinched my arms around his waist and as we pulled out of the overlook, felt the quiet acceleration and perfect balance of a horizontal twin BMW - a feeling, after thousands of miles, I now know so very well.

Prior to meeting with my father, Mom parked our pop-up, Coleman camper about 75 miles away in the Old Corundum Mill Campground, just outside of Franklin. For the next two hours on the ride to the campsite, it was just dad and me, winding our way through the twisty mountain roads of the Blue Ridge Parkway.  I'm sure my siblings were jealous - but none of them could have loved motorcycles like I did. We'll, I guess my brother did learn to love bikes too, but at the time, he was just six. Sitting on the back of the BMW's big Denfeld seat, holding Dad like I'd never let him go again - that was the closest I ever felt to my father.

Thirty years and many, many motorcycles later, my son Ricky and I toured the same Blue Ridge roads on a sporty,  Triumph Tiger 900. Ricky was 12 at the time and even though it was cold and rainy,  he now remembers it as one the best times we ever had together. 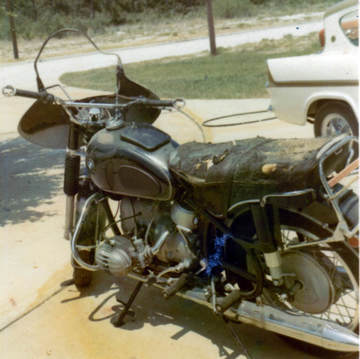 Less memorable was when a driver ran a stop sign and hit Dad in 1970. The bike caught fire but was repaired.
Once we returned to Florida, I developed a very special relationship with that BMW.  For years, I would wash and wax this bike like it was mine.  After every wash, I'd always push the plastic Bosch key into the headlight shell, tickle the carbs and fire her up.  I fabricated an excuse about drying off the engine properly and keeping the bike running right for Dad, but the real truth was, I just loved the sound of that old boxer twin ticking quietly away - strong and silent. I was also pretty impressed with myself that I could kickstart a bike that big. Yes, there was this unwritten law that I was never allowed to touch dad's things, but for some reason he let me get away with washing and starting the R60. He knew I loved this bike, and like other motorcycles I'd ridden, I wouldn't abuse it. I guess he probably realized the the bike would start easier if I kicked it over once in a while, but I also think he was secretly proud that his scrawny, 100-pound-kid could start a 600cc twin with ease.

In 1970, a woman ran a stop sign and Dad dropped the bike to avoid her. The scraping of the crash bars on the road ignited fuel leaking from the tank. The bike wasn't damaged too badly and quickly repaired. Dad was a bit less fortunate. I remember him limping through the door after Mom brought him back from the hospital. He had so many bandages wrapping his arms, legs and midsection, he looked like a mummy.  That accident was also the beginning of the end of my parents 25-year marriage.

Six years later when I was about to graduate from high school, Dad told Mom of his intentions to give me the bike as a graduation present. By that time, my folks were divorced and Mom just knew I was going to die in a motorcycle accident.
Suffice it to say, Mom threw a fit and demanded he not give me the BMW.  I was heartbroken. Keep in mind, by this time I had been riding for at least eight years, so it's not like I wasn't experienced. Maybe it was the block-long wheelies that gave Mom this constant premonition of my premature demise via motorcycle.  I guess I was a bit reckless at the time. So when Mom laid down the law regarding the R60, my father responded with a classic "take that" gesture. When I came home from the Lakewood High graduation ceremony (something most of my family though I'd never live long enough to attend), there was a stunning, almost new, H1-Kawasaki 500 in the driveway.  I nearly dropped dead from shock.

At the time, the H1 was the fastest, most dangerous bike on the road. It' was so fast and handled so poorly that when earlier versions came out, the Cycling Press dubbed it the "Widow Maker." It was the one and only time my father ever bought me anything resembling new - and I'm absolutely sure, that bike was purchased with the singular purpose of pissing mom off.  It worked. She was furious, of course, but I told mom I'd rather move out than give up the bike. It wasn't long before she kicked me out anyway, but that's another story - and it had nothing to do with the green machine. True enough, the Kawasaki could have indeed killed me, particularly because I rode it like a junior Kenny Roberts - often wheeling down the road with my buddy or girlfriend on the back - or driving down the 140-foot Skyway bridge WFO. That still gives me chills today when I think about the stupidity of riding that fast (speedo pegged) on a poorly maintained bike. What if the constantly ill-adjusted chain let loose or if I blew the bald rear tire? Somehow I survived the H1 (as did girlfriend, Micky, and my eventual best-man, Gray).
Kevin, my younger brother, ended up getting the BMW a few years later for his graduation. He promptly ran it into the side of a Buick. Kevin was really good at wrecking bikes and somehow surviving. He's older and wiser now - I hope. The bike sat in my father's jam-packed warehouse, the front end crumpled under the engine for over 30 years. Even though I was pretty good at restoring bikes, and even though I kept after him for almost as long as the bike was in the warehouse, Dad would never let me remove it from its position of shame, sitting under the rotting stairs to the loft. And the funny thing is, Dad never did give me the bike. I guess he considered the H1 a lifetime present, so maybe he didn't think I deserved anything else.  About 10 years ago, Dad finally relented and allowed me to drag the bike from the warehouse.  I wish I had some pictures that day, but I had to move fast before he changed his mind.  He did this with the distinct stipulation that the bike would be restored for Ricky, his namesake. With the bike now ostensibly mine (sorry Sport - it's yours when I die or when I can no longer stand up to start it), I restored the bike to like-new condition and fortunately, Dad got to see it finished before he died. Yes, I let Ricky ride the bike - down the block under extremely close supervision. You see, like his Uncle Kevin, Ricky also has a number of broken and pinned-up bones due to motorcycles.

Writing about this bike has been a cathartic process - bringing back many wonderful memories that were once lost to time. Dad and I had a difficult relationship, but I learned so much from the man. People tell us we were very much alike - that might have been the source of the friction between us.  When recalling this old BMW, I'm fairly certain Dad didn't love that bike as much as I did.  After all, it may have been the impetus for his divorce from Mom.  There's no doubt why this bike meant so much to me though -- it was a mechanical metaphor for Dad. It also represented adventure, travel, mystery and, of course, freedom. But more than that, the old European beauty serves as a constant reminder of a very special memory - the best time I ever spent with my father. 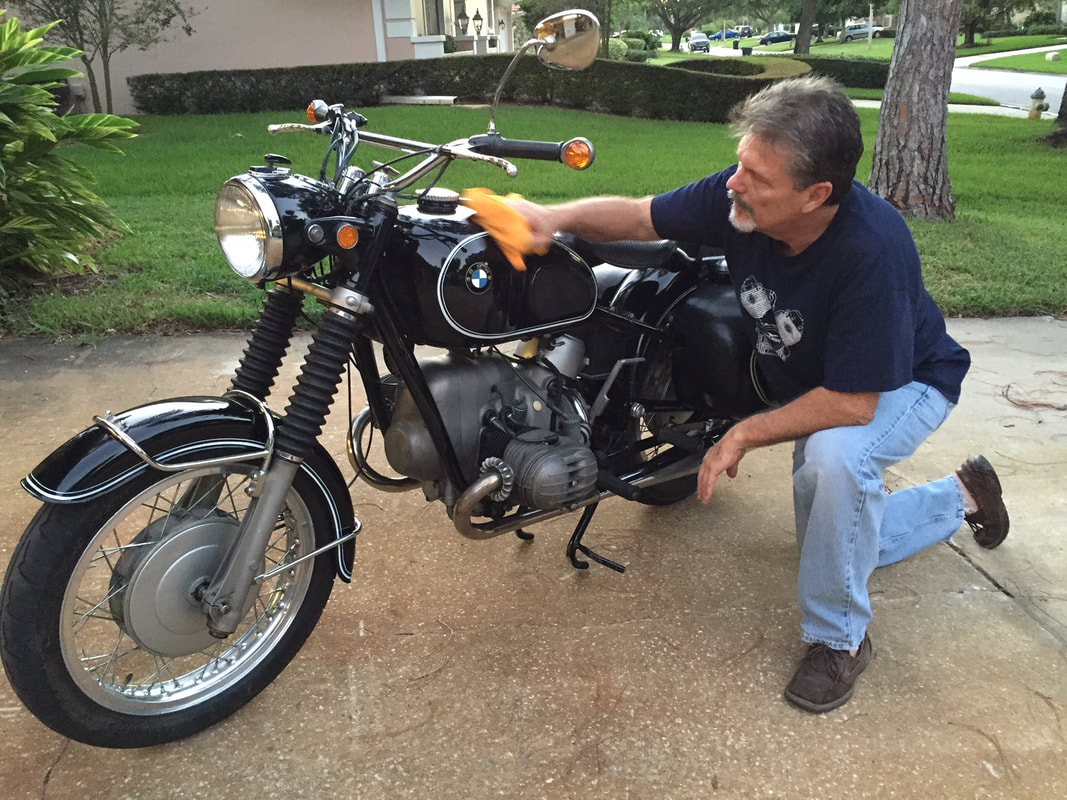