DISCLAIMER:
The guideline provide here is just that, a guideline. It is not a factory manual.  This guideline is offered as entertainment. It in no way suggests that anyone, who is not a trained mechanic, can use this guideline to safely rebuild any motorcycle carburetor. Motorcycle repairs should only be undertaken by a professional. Use this guideline at your own risk. Improper assembly or tuning of a carburetor could result in injury or death. The Vintage Bike Builder accepts no responsibility for any injuries or damage resulting from reading this manual.

A project I didn't want...
A few years ago, I received a GL500 (I didn't particularly want) in a trade with several other bikes. It's not that I don't like the CX or GL, I do. In it's time, it was a really creative design that put forth a nice, dependable motorcycle that was perfect for city cursing or even a little travel.  It took me about two seconds to decide I didn't want the bike. Not only did it have a room in the shop (and storage), it also looked pretty bad. It had been outside for years and  someone had a minor accident that damaged the fairing and saddlebag on one side.

But, it would make a perfect gift for a good buddy of mine who stops by to help me constantly. He could afford a new motorcycle, but he'd never buy one - especially when he could just ride one of mine. So, before I told him about the bike, I  spent about an hour quickly flushing the carb, installing a battery and confirming the engine ran well enough to give to him rather than part out for salvage.  My friend was initially very excited about the bike, but he didn't want to spend any money or time to get it going, so it sat. And sat and sat - 10 years in an airport hanger which, unfortunately,  was only about 50 yards from Tampa Bay's salt water. Needless to say the environment was conducive to rust.  This buddy called me a couple weeks ago and said the city was demolishing the old hangars, so he was going to give the bike back to me. Yeah. The bike ran pretty good 10 years ago, but that was 10 years ago.  I decided to get the bike running, spending minimal funds and then find another deserving soul.  To do that, I first had to properly rebuild the carbs.

I'm one of those weird folks that likes to rebuild carbs.  It requires a bit of patience, and frequently, a bit of ingenuity. I could have put a pair of Mikuni VM30s on the bike, which I've done before, but this time I was determined to tackle the Kehin carbs on the bike. These CV carbs are about the final evolution in Keihin carburetor design.  The constant velocity design provides excellent throttle response, but Keihin wanted to go a step further, so they added an accelerator pump, a primary and secondary main jet, as well as an air cutoff valve.  Then they fastened the carbs together in bank, sharing fuel, air, vacuum as well as linking throttle and choke cable. It's a fairly complex carb - but a good, dependable carb. It's also fairly easy to rebuild - even for a novice.

When possible, I like to share my knowledge. I know what I know because of people that have helped me along the way. So, in a sense, I'm paying it forward.  I hope this provides a good service to my friends in the vintage motorcycle community. After all, we want to keep these old bikes on the road.

Disassembly
You can see from the photos below, the carbs weren't all that dirty, but they did have a thin layer of corrosion, familiar to anyone who has ever worked on a boat engine (used in salt water). Before I did anything else, I put the carbs in my VaperBlaster, which for the most part, brought the exterior of the carbs back to it's original factory luster. I avoided spraying inside the carb, although any remaining media can easily be removed.  After blasting, I rinsed the carbs in a mixture of Dawn and water, and them blew them out with clean, compressed air.  I understand not everyone has a blaster, so if you don't skip onto the next step.
Before I could move to the next step, I have to take the carbs completely apart.  I'm an old guy and I used to make a lot of notes when taking carbs apart (those I was unfamiliar with). These days, I use a photograph record.  Cell phones are an easy way to help remind you of  how parts were disassembled. I strongly recommend photographing every step of disassembly. Don't rely on my photos. 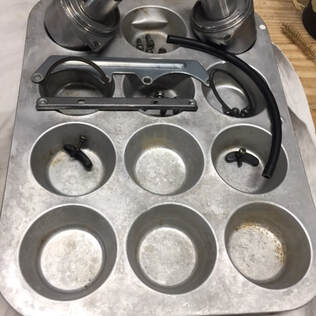 I first removed the float bowls to take a quick look inside.  I think then put the bowls back on. I also did the same with the throttle slide.  If the inside was corroded past repair, or if the slides were bonded to the carb bodies (I've seen this before), the carbs would have been headed to the trash. You don't need to do this unless you have a concern.  But, before you dissemble anything, but the float bowls back on.  You don't want to damage the fragile floats.

Enlarge the center photo above and you'll see a thin metal bracket spanning the carbs. This is held on by four, Phillips screws. Remove these screws and set them aside. By the way, did you put the float bowls back on???  Now, flip the carb over (above right photo) and remove the four screws on the pressed brace holding the front of the carbs together. From this point on, until you separate the carbs, take great care handling these delicate instruments. If you don't, you'll bend the throttle or choke rods. You don't want to do that, or you be buying a set of carbs off eBay.

In the photo to the right, you'll see a clever sorting tool that looks like it came from your mom's kitchen. That's because it did. I was at her garage sale! Anytime I see aluminum muffin tins or stainless bowl sets at garage sales a snatch them up.  They are fantastic for sorting parts.

The photos in the group below are to help you remember how the linkage fits together. It's not complex, but then again, it is - a bit. So you want to be careful. You want to take your time. And you want to take photos BEFORE you remove anything (see note below).

With the front an back brace removed, carefully (gently, very gently) begin pulling the carbs apart. Before you separate them completely, you'll want to release the spring that hold the the right side of the throttle linkage against the left. If you look closely at the center photo in the middle row, you can just see the tip of the smaller spring laying into a grove on the left carb. Use an awl, ice pick or tiny screw driver to carefully lift that spring from the groove. This will allow you to fully separate the carbs. This is shown in the far right photo of the middle row.

NOTE: TAKE SPECIAL NOTICE HOW THESE PARTS FIT TOGETHER - TAKE GOOD PHOTOS.  DO NOT RELY ON MY PHOTOS FOR YOUR DISASSEMBLY!  I have made this mistake before and, believe me, it is no fun trying to figure out how a linkage is designed to work.
In the two photos above, you'll see a smaller, shared vacuum tube and larger tube that shares fuel between the carbs. These will be held into place with O-rings that, I promise you, are completely dried out. These need to be replaced. By a kit that includes these or you will be taking your carbs apart again because it will be leaking fuel .
Assembly:  Please check back soon!